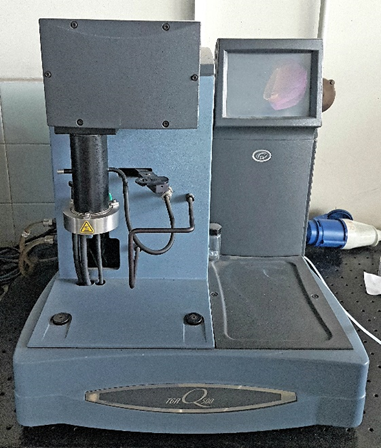 Thermogravimetric Analysis, TGA, is a technique of thermal analysis in which the mass of a substance is monitored as a function of temperature or time as the sample specimen is subjected to a controlled temperature program in a controlled atmosphere. TGA can provide information about physical phenomena, such as second-order phase transitions, including vaporization, sublimation, absorption, adsorption, and desorption. Likewise, TGA can provide information about chemical phenomena including dehydration, decomposition (i.e. loss of organic addends on nanostructures, structural deformation), and solid-gas reactions (e.g., oxidation or reduction). TGA is commonly used to determine selected characteristics of materials that exhibit either mass loss or gain due to decomposition, oxidation, or loss of volatiles (such as moisture).

The basic part of a TGA setup is its cell. It consists of a sample pan and a reference pan that are supported by a precision balance. The pans reside in a furnace and are heated or cooled during the experiment. The weight detector monitors the mass loss of the sample during the experiment. A sample purge gas controls the sample environment. This gas may be inert or a reactive gas that flows over the sample and exits through an exhaust.