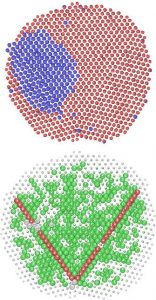 In order to address the challenge of treating different length and time scales, as it is necessary to support the corresponding growth and characterization activities, we employ an ab-initio based bottom-up (upscale) multiscale and multischeme approach, which combine first principles, with interatomic potentials calculations, Molecular Dynamics (MD), Monte Carlo (MC) calculations, with thermodynamics and elasticity theory concepts.

Interatomic potentials-based MD calculations are capable of describing systems consisting of few tens of millions of atoms and for time scale in the range upto few microseconds. They can accurately describe elastically strained regions such those developed by the dislocations strain field. Therefore, empirical potential calculations are used to simulate the elastically strained regions arising from extended defects, as well as to investigate the strain fields and the elastic and mechanical properties of heterostructures and nanostructures such as quantum wells, quantum wires, quantum dots.

The growth simulations is performed by Monte Carlo calculations, where the corresponding kinetic barriers is provided by the ab-initio simulations. The phenomena that addressed by the MC simulations are the initial stages of growth and nucleation on the substrates as well as the growth and surface morphologies of various heterostructures. Thus, kinetic MC simulations constitute an extension of the first-principles calculations in time scales upto many microseconds.

Ask for more information on availability,dates and pricing Submit Your Query
provided at Innovation-el by:
ElMicLab/AUTh Thessaloniki